HUBBARDSTON, MA                                                                                                2016
Dear Egg Buyer;
I do love to tell people about this wonderful and charming farm, about our healthy hens, the exceptional eggs, and the fantastic farm folks that work here. There are so many incredibly good things to tell! All of the best features of our farm are the result of some very impressive Quality Control Protocols that every employee incorporates into their respective duties in order to provide you with the best eggs possible.  We do so many different types of quality testing and we are so proud of our commitment to quality that we have broken them down into a mini-series.
Upcoming issues of our Farm News will include six consecutive stories about our dedication to quality and will run for a very limited time. The numbered series will outline the quality control protocols we employ in each of our departments in this order:  1. Production, 2. Feed Mill, 3. Egg Quality Lab, 4. Processing and Packaging, 5. Employer and Employee, 6. Customer Service.
I truly believe new customers and even our long-time customers will be pleasantly surprised to read about the various tests we conduct that go well above and beyond those required by regulative authorities like the USDA and FDA. The additional testing, documentation, and research we voluntarily perform demonstrate our obsessive commitment to maintaining the highest and most consistent quality organic eggs. We are always exploring and searching for ways to improve. We want all of our customers to know what lengths we go to in our pursuit of perfection.  The Farm News inserts offer us the unique ability to outline the quality assurance protocols we are so very proud of.
If you are among the group of Farm News fans who like to collect them, you will not want to miss out on any from this upcoming series of six. Each feature from this numbered series will run for a limited time only.  We would love to hear from anyone who successfully collects all six from this series. Take a picture of your collection and send it as an attachment to an email to: customerservice@countryhen.com or you could send the picture to us in the mail addressed to: The Country Hen, PO Box 333, Hubbardston, MA 01452. The first six customers who manage to collect the whole series of six will receive a very special prize from The Country Hen.
Posted by The Country Hen at 5:36 AM No comments: 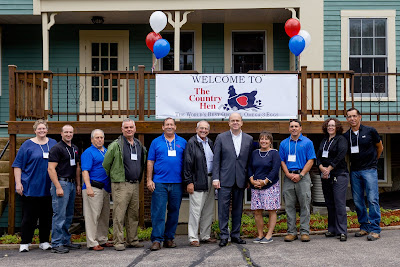 The Country Hens Open Their Nests To VIP Guests…..


The Country Hen, home of the Original, Organic Omega-3 Egg, was honored to host US Congressman McGovern, MA Sen. Gobi, MA Rep. Berthiaume, and other VIP guests on August 2, 2016.


Bob Beauregard, General Manager, and Jim Rousseau, Sales Manager, provided guests with a tour of the farm and sites of: The Country Hen’s expansion project and the renewable energy solar project. The expansion project, upon completion, will provide 3 new state-of-the art barns that will ultimately increase The Country Hen’s production in Hubbardston by 75%. When completed. The solar project will provide 100% of the energy needed for the main farm including all the barns, processing room, and feed mill.


The National Organic Program’s (NOP) proposed rule affecting changes to Animal Welfare in the organic system was discussed. In 2002, The Country Hen received organic certification utilizing a porch design for outdoor access. Over the past 14 years, organic egg producers have steadily increased their production with this design. During the tour of the porches, guests were given a detailed explanation of the benefits of the porch system. This included the ability to meet FDA egg safety requirements, practical manure management, disease prevention, and the reduction of exposure to predators and parasites.


Lastly, there was a discussion of November’s MA ballot question, The Farm Animal Containment Initiative. This would require that all eggs produced and sold in Massachusetts be from cage free production, which is the practice that The Country Hen has implemented since its’ inception.
For All of Us at The Country Hen, Kathy Moran